Just today, Joe Biden referred to Pennsylvania voters as "chumps," demonstrating his complete disdain for the hard-working men and women of America. This comes on the heels of Thursday's debate, in which Biden made clear his plans to destroy the Pennsylvania energy industry simply to appease his elite, radical environmentalist base. In a press call with former Representative Lou Barletta (PA-11) and Sean Steffee of Boilermakers Local 154, the Trump Campaign exposed Joe Biden for his offensive disregard for the interests of blue-collar Americans. 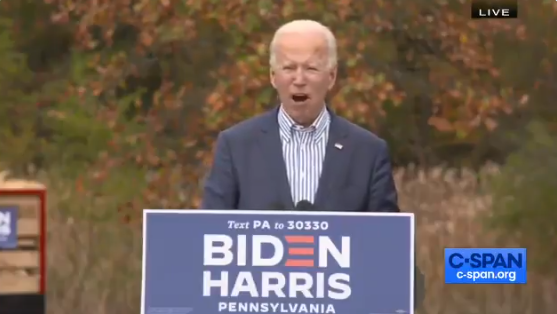 "Joe Biden cares far more about the sensitivities of his coastal elite base than he does about the hard-working men and women of America. He has consistently demonstrated his contempt for American workers by happily shipping jobs overseas, attacking the energy industry, and now calling hard working Americans who don’t support him 'chumps' - all to appease his liberal extremist handlers. It has never been more clear that President Donald J. Trump is the only candidate in this race who will fight for American workers and defend them against the far-left," said Tim Murtaugh, Trump 2020 Communications Director.

"11 million people will lose their direct jobs under Joe Biden's plan. The country will fall into a deep depression as the United States will once again be dependent on foreign countries for our energy. Today, America is energy independent and an energy exporter, mainly because of the fracking here in Pennsylvania. Pennsylvania will lose 609,000 jobs," said former Representative Lou Barletta (PA-11).

Questions of the day for Joe Biden