The panel discussed their experience and the enthusiasm at President Trump's Tulsa Rally with more than 11 million people who tuned in to watch on the campaign's digital platforms and the record-breaking 7.7 million views on Fox News. They compared President Trump's unprecedented record of accomplishments for the Black community, through school choice and funding for HBCUs, to Joe Biden's five-decade history of detrimental, racist policies targeting Black Americans. The panel highlighted President Trump's Executive Order on Safe Policing for Safe Communities and how it empowers communities to rebuild relationships between law enforcement and their citizens. President Trump restored our nation's economy to unprecedented heights before it was artificially interrupted by the coronavirus outbreak. The panel provided insight into how this strong foundation has paved the way for a quick economic rebound. 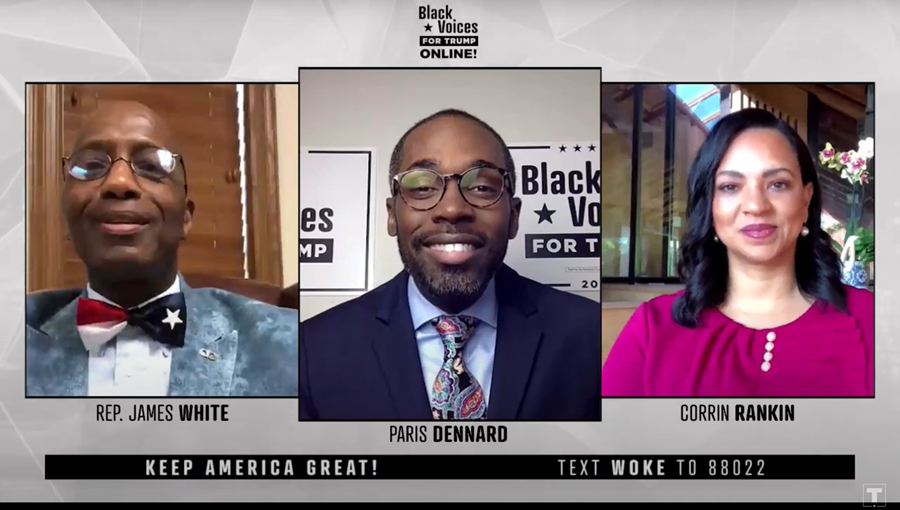 “The Republican Party has always stood for emancipation, freedom, and opportunity, and under President Trump, we have achieved record accomplishments for the Black community,” said Paris Dennard, RNC Senior Communications Advisor for Black Media Affairs. “Joe Biden is only acting concerned about the plight of Black Americans because he's running for president. Biden's five-decade record of imposing policies and statements that have hurt Black Americans will no longer be ignored. In November, President Trump will make sure Biden retires to his basement with all of his bigoted comments and destructive policies that have hurt the Black community.”

“Under President Trump’s pro-growth, pro-worker policies, Texas has become one of the top states for Black entrepreneurship,” said Texas State Representative James White (TX-19). “A Joe Biden economy would do nothing but reverse the success we have experienced these last four years and strangle small businesses in Texas with high taxes and burdensome regulations.”

“Throughout our nation’s most challenging times, President Trump’s bold leadership and record as the Jobs President goes unmatched. Joe Biden does not stand a chance,” said Corrin Rankin, Black Voices for Trump Advisory Board Member. “It is crucial that Black Americans do their homework on Joe Biden because when they do, they will realize the damage his harmful policies have brought to the Black communities everywhere.”