Latinos for Trump Online: President Trump is the President of Freedom

In light of the Fourth of July and Venezuelan Independence Day, the panel discussed why we celebrate freedom in America and across the world. They discussed President Trump's inspiring message at Mount Rushmore about the importance of freedom and used personal experiences to explain how quickly those freedoms can be stripped away if taken for granted. While President Trump is fighting to preserve our founding principles, Joe Biden and the Democrat Party have continually embraced radical socialist policies that threaten the freedoms of Americans across the country. From defunding the police to taking away our guns, the panel emphasized the dangers of a Democrat-controlled Presidency and the importance of keeping President Trump in the White House for four more years. 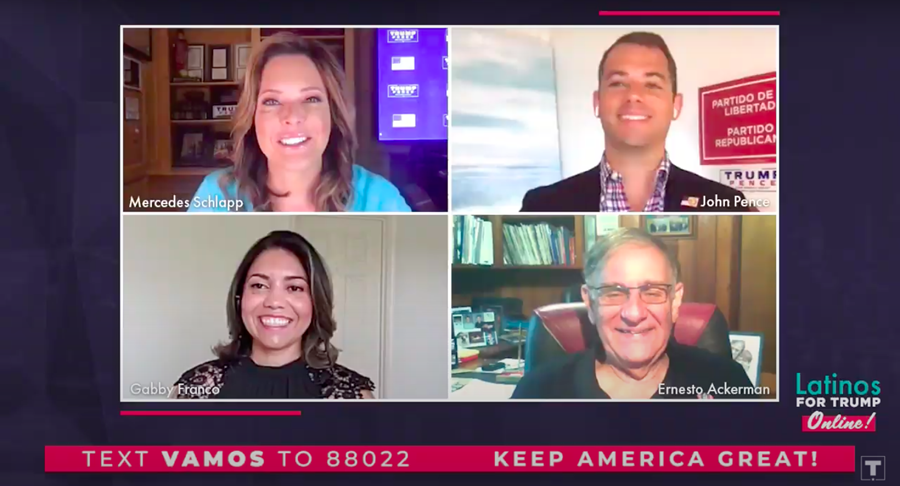 "As the daughter of a freedom fighter who fought against an oppressive, communist regime in Cuba, I have seen firsthand how socialism has destroyed prosperous nations like Venezuela," said Mercedes Schlapp, Trump 2020 Senior Advisor for Strategic Communications. "While Joe Biden has continuously turned a blind eye to destructive dictators and welcomed more government control into his radical agenda, President Trump is standing strong for freedom, independence, and democracy at home and around the globe."

“President Trump’s speech at Mount Rushmore reaffirmed his commitment to our God-given rights of liberty and justice for all, standing in stark contrast with radical leftists who seek to turn our country into another Venezuela,” said John Pence, Trump 2020 Senior Advisor. “While Joe Biden seems to be ashamed of the United States and its history, President Trump will always stand strong for Freedom & American Greatness. Por eso, el Partido Republicano es el Partido de la Libertad.”

“When I was a young girl living in Venezuela, I believed I could do anything. Then, the government started implementing more and more restrictions, and we began to lose everything we had," said Gabby Franco, Olympian and Firearms Instructor. "Venezuela's swift shift from a thriving country to a deprived, socialist nation serves as a stark reminder of how important it is to elect a President - like President Trump - who will prioritize the people over power and fight to preserve our freedoms at all costs."

“I left Venezuela looking for a better future while rioters dismantled the nation’s history and defunded the police. President Trump will fight to ensure that never happens in the United States,” said Ernesto Ackerman, President of Independent Venezuelan American Citizens. “Joe Biden is a puppet for the radical left as they seek to destroy our country, and that is why we must re-elect President Trump for four more years.”