President Trump built the greatest economy in American history before the artificial interruption of the coronavirus, and only he is capable of leading the Great American Comeback once again. Meanwhile, Joe Biden threatens our recovery by promising to raise taxes by $4 trillion, enact his version of the radical Green New Deal, and shut our economy down again. Representative Ted Budd (NC-13) and Gary Rabine, Broadcaster of the Ditch Digger CEO Podcast, discussed all this and more on today's 'MAGAnomics' broadcast, hosted by Steve Cortes, Trump 2020 Senior Advisor. 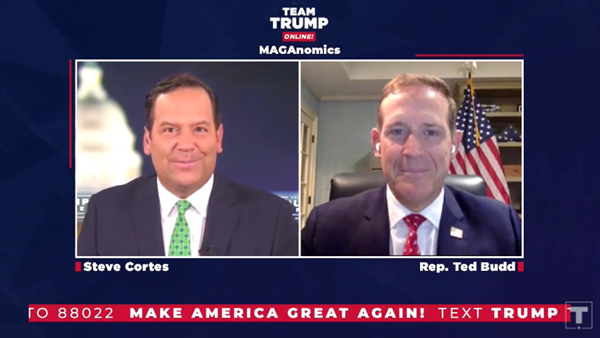 "In my home state of North Carolina, career politicians like Joe Biden hollowed out businesses and manufacturers for decades with their failed policies," said Representative Ted Budd (NC-13). "Meanwhile, President Trump is a builder and knows how to bring jobs back to the American people."

"In the upper Midwest where I am from, we have seen the positive impact of President Trump's pro-growth agenda after nearly a decade of failed leadership under the Obama-Biden Administration," said Gary Rabine, Broadcaster of the Ditch Digger CEO Podcast. "While Joe Biden promises a return to devastating government overreach and liberal attacks on business owners, President Trump will rebuild the American economy once again."