The panelists discussed personal stories of their loved ones who paid the ultimate sacrifice while fighting for America and how each family continues to keep their memories alive. They highlighted President Trump's unwavering commitment to the brave men and women in the United States military who were ultimately neglected and forgotten by the Obama-Biden administration. The panel provided insight into President Trump's bold stance against Iran and ISIS, and the killing of terrorist leader Qasem Soleimani, who was responsible for countless American deaths. They also discussed President Trump's commitment to getting out of endless wars and bringing our troops back home, all while taking care of veterans and military families in the process. Finally, the group encouraged all Americans to support President Trump in November and explained the many ways that voters can get involved with the Trump 2020 Campaign. 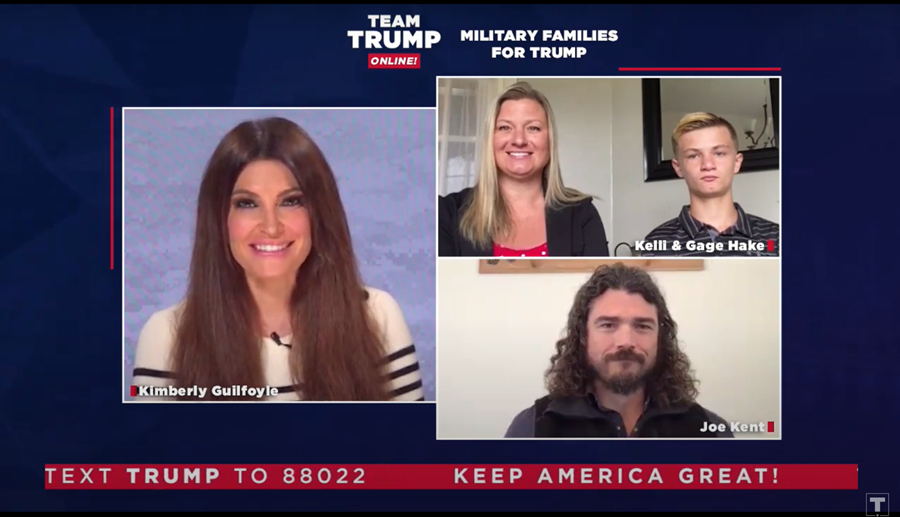 "President Trump has tremendous respect for the United States military and provides unwavering support for our nation's veterans and military families,” said Kimberly Guilfoyle, Trump 2020 Senior Advisor and National Chair of Trump Victory Finance Committee. “The brave men and women who fight for our freedom will never be forgotten or overlooked by President Trump. As Commander-in-Chief, he has shown tremendous resolve in standing up to America's enemies and taking decisive action to protect all who serve our great nation.”

“From his bold stance on Iran to his decisive action to defeat ISIS, President Trump is exactly who we need as commander-in-chief for four more years,” said Joe Kent, Veterans and Military Families for Trump member. “While President Trump has been a fierce advocate for our men and women in uniform, Joe Biden has been soft on America’s enemies and has left our military out to dry for decades.”

“President Trump promised to take care of our nation’s service members, defeat our enemies, and end our endless wars overseas, and he has kept his word,” said Kelli Hake, Military Families for Trump member. “Under President Trump, I can rest assured that our brave men and women in uniform and their families are being taken care of again, and that our enemies will be kept from attacking us here at home.”