The panel contrasted President Trump's ability to lead America to four more years of greatness with Joe Biden's radical, out-of-touch policies and his submission to socialist leftists like AOC and the squad. They condemned Joe Biden's unfitness for office, his campaign's shelter-in-place strategy, and Biden's failure to denounce the horrific violence and destruction unfolding across America today. The panel also recapped some of the best moments at President Trump's rally in Tulsa last weekend, highlighting the thousands who attended in person and the millions who tuned in online across the country. Additionally, they expressed their dismay for John Bolton as he goes on a media tour and undermines our national security for personal gain. 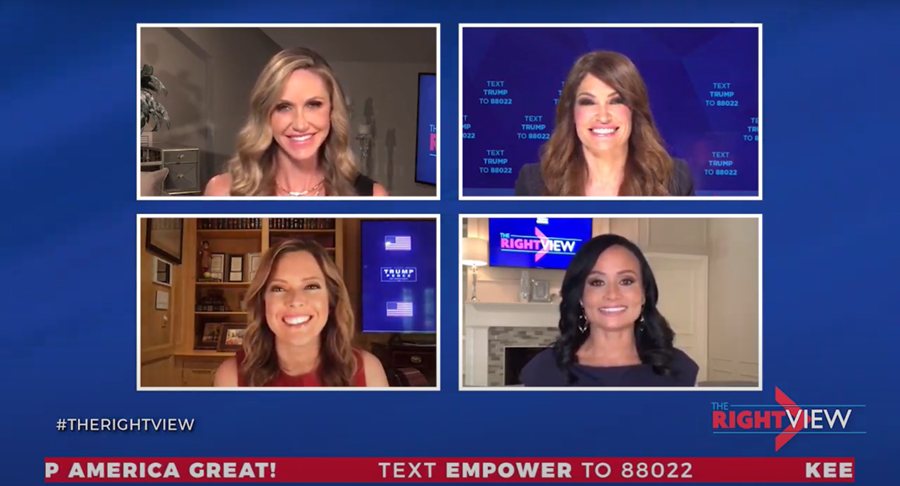 "Joe Biden would be nothing more than a puppet for AOC and the rest of the socialist squad if he got elected," said Lara Trump, Senior Advisor to the Trump Campaign. "Our enemies around the world are salivating over the thought of Sleepy Joe becoming President. We do not need another weak leader, we need four more years of President Trump to maintain a strong, successful America."

“With over 11 million viewers who virtually tuned in to President Trump’s Tulsa Rally, it remains clear that the American people are enthusiastic about four more years of Promises Made, Promises Kept,” said Kimberly Guilfoyle, National Chair of Trump Victory Finance Committee. “In stark contrast, Joe Biden and his handlers are pandering for votes by kneeling to the radical left who are still unenthused by their de facto nominee."

“Joe Biden might act like a moderate on camera, but behind the scenes he is controlled by far-left Democrat party operatives who will stop at nothing to destroy the history and values that make America great,” said Mercedes Schlapp, Trump 2020 Senior Advisor for Strategic Communications. “This November, we need to put Biden back in his basement so that his socialist supporters are kept out of the White House.”

"It's been more than 80 days since Joe Biden has held a press conference, and it's no wonder his handlers don't want him in front of a camera," said Katrina Pierson, Senior Advisor to the Trump Campaign. "Biden can barely string two sentences together much less make critical life and death decisions. We need to send a message to the left that there is a silent majority out there, and we reject Joe Biden’s weak-kneed, radical leadership."