The participants explained how the Trump Campaign is recruiting and activating volunteers around the country. They spoke about the Democrats' attempts to undermine our election security, and how Republicans around the country are working to ensure the integrity of our elections. Additionally, they spoke about how enthusiasm for President Trump is delivering victories for Republicans across America, and how that support will only continue to grow. Finally, the panel detailed the variety of ways Americans can virtually join the Army for Trump to fight for the re-election of President Trump this November. 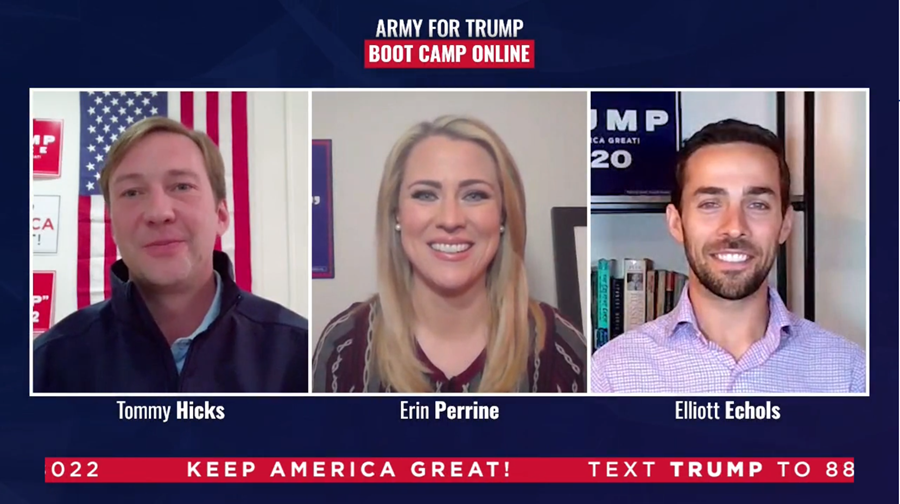 “The Army for Trump has never been stronger, and through the engagement of our volunteers and supporters we are building an unbeatable campaign,” said Erin Perrine, Trump 2020 Principal Deputy Communications Director. “Though the Democrats are trying to undermine our progress by loosening protections to safeguard election integrity, we will win in November because of our enthusiasm and our respect for America’s free and fair election system.”

“The Trump Campaign transitioned seamlessly into virtual campaigning, and we are far outpacing the Democrats with our voter contacts and volunteer recruitment,” said Tommy Hicks, RNC Co-Chair. “Joe Biden’s lackluster efforts simply cannot compete with our campaign and we will be firing on all cylinders as we approach November.”

“Around the country, our team quickly transitioned to virtual campaigning and now is primed to get back into the field and build up support for President Trump’s re-election,” said Elliott Echols, Trump Victory National Field Director. “Team Trump is building a record-breaking campaign that the Democrats will be unable to beat on election day.”

“The Trump Campaign now has the resources to compete in places that we have previously never set foot and that will make all the difference in this election,” said Stephanie Alexander, Trump Victory Midwest Regional Political Director. “Our volunteers are ready to hit the road again and deliver a huge win for President Trump.”

“As we saw in California’s 25th Congressional District last week, Republicans are excited to vote and are ready to re-elect President Trump,” said Jeremy Hughes, Trump Victory Pacific Regional Political Director. “Though the mainstream media ignores our progress, we are going to win in November because of our organizing capabilities and the enthusiasm of our supporters.”