The panel compared President Trump's care and compassion for veterans and service members with Joe Biden's weak, liberal agenda. They described how Americans everywhere are coming together in this time of need despite the lies and mischaracterizations propagated by the radical left and the mainstream media. Finally, the participants detailed ways in which voters can become involved with the Trump 2020 campaign and work to re-elect President Trump. 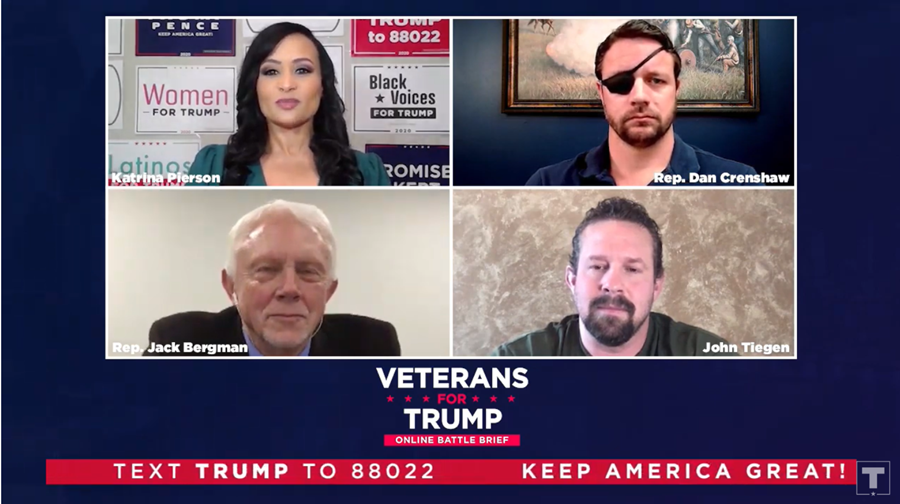 “President Trump has shown unprecedented care for American veterans, especially during our current coronavirus crisis,” said Katrina Pierson, Senior Advisor to the Trump Campaign. “While Joe Biden has spent decades undermining our strength at home and abroad, President Trump has won the support of our service members through his unwavering commitment to their well-being.”

“The state of Michigan has been on the front lines of the Left’s war on American freedom and economic security,” said Representative Jack Bergman (MI-01). “While Joe Biden and the Democrats focus on taking away our Constitutional rights, President Trump is committing the entire federal government to protecting our health, liberty, and economic security.”

“Political opportunism has reared its ugly head. Some people have even taken a step farther and said, ‘because of this crisis their radical agenda should be implemented,’ and that’s obviously the wrong way to think about it," said Representative Dan Crenshaw (TX-2). "We should be in problem solving mode and figuring out how to work together to get to a common goal, which is the goal of getting back to normalcy.”

“I saw Joe Biden’s failures firsthand when I served during the attacks on Benghazi in 2012, and know that we cannot afford another term of weak liberal leadership,” said John ‘Tig’ Tiegan, Veterans for Trump Advisory Board member. “Veterans like myself support President Trump because he has rebuilt our military, taken care of our veterans, and is committed to putting America first.”

TIMELINE: The Trump Administration’s Decisive Actions To Combat the Coronavirus