Joe Biden has embraced the most radical agenda in recent political history and plans to restart the Obama Administration's assault on religious Americans and force taxpayers to fund abortions up until birth. In stark contrast, President Trump and Vice President Pence have stood by Americans of faith and are working to reestablish the sanctity of life. As Vice President Pence discussed while in Selma, North Carolina, the choice for religious Americans is clear: only President Trump will stand as a steadfast champion of religious liberty:

"From day one, this President has stood strong for the right of every American to live, to work, to worship according to the dictates of your conscience. You know, when Joe Biden was vice president, we saw a steady assault on the religious freedom of Americans - it's true. I mean, it's amazing to think the last administration literally hauled the Little Sisters of the Poor into federal court to force that group of nuns - who had taken a vow of lifetime poverty simply to serve the underserved community - hauled them into federal court to force them to compromise their faith to live under the strictures of Obamacare. President Trump? We've restored the conscience rights of doctors, nurses, teachers, religious charities, and we ended the assault on the Little Sisters of the Poor. And the Supreme Court of the United States made it permanent by a vote of seven to two. I can tell you, people of faith have no greater champion than President Donald Trump. And finally, where Joe Biden and Kamala Harris support taxpayer funding of abortion all the way up to the moment of birth, they're calling for historic increases in the largest abortion provider in America, and want to fund and promote abortion around the world, I couldn't be more proud to serve alongside a President who stands without apology for the sanctity of human life. President Donald Trump is the most pro-life president in American history." 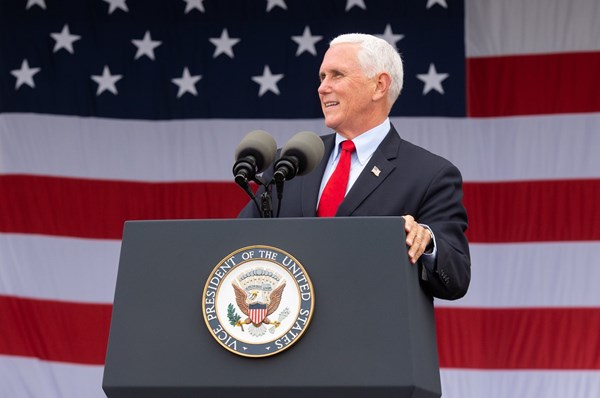