President Trump has been a consistent champion of America's service members and veterans and has succeeded at rebuilding our military, reforming the Department of Veterans Affairs, and launching initiatives to help veterans adjust to civilian life. Joe Biden, meanwhile, has spent 47 years in Washington supporting never-ending foreign conflicts, cutting funding for our troops, and allowing our veterans to go without the quality healthcare they deserve. As Vice President Pence discussed at a 'Veterans for Trump' event in Litchfield Park, Arizona, held in honor of POW/MIA Recognition Day, President Trump is the clear choice for America's heroes:

"Four years ago, after Joe Biden was Vice President of the United States, we inherited a military that had been hollowed out by devastating budget cuts. Iran was resurgent in the Middle East, ISIS controlled a landmass larger than Pennsylvania, and under the last administration, veterans were literally dying on waiting lists at the VA, with some of the worst abuses happening right here in Phoenix. But when President Donald Trump stepped into the White House, that all changed." 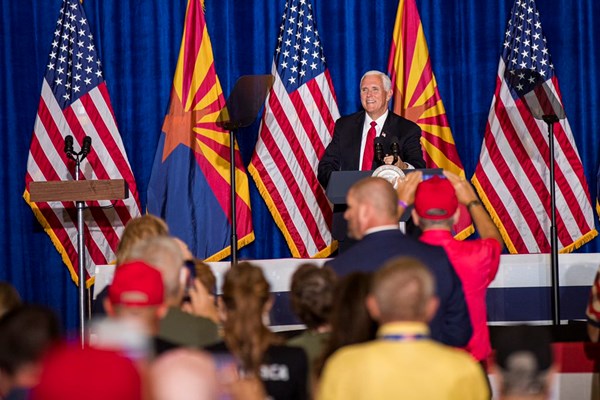 Vice President Pence also attended a Libre Initiative Roundtable at Grand Canyon University and spoke directly to President Trump's record for Latinos. President Trump has been a strong supporter of Latino voters and will deliver four more years of record prosperity when re-elected.