For nearly fifty years, Joe Biden has sold out American workers and shipped jobs overseas, sacrificing America's economic success in pursuit of his globalist agenda. President Trump, on the other hand, delivered the greatest economy in American history by uplifting blue-collar workers and standing up to China. Joe Biden now threatens that success with his radical proposals including a $4 trillion tax hike and his version of the radical Green New Deal. As Vice President Pence explained during a visit​ to Zanesville, Ohio today, only President Trump's America First agenda can save our economy and deliver the Great American Comeback:

"Joe Biden? Well for decades he was a cheerleader for communist China. And where we've stood strong to level the playing field, Joe Biden announced about a month ago that he wants to repeal all the tariffs that President Trump put into place to level the playing field for American workers. President Trump? He stood up to China from day one and said the era of economic surrender is over. And I promise you when it comes to trade, President Trump is always going to put American jobs and American workers first." 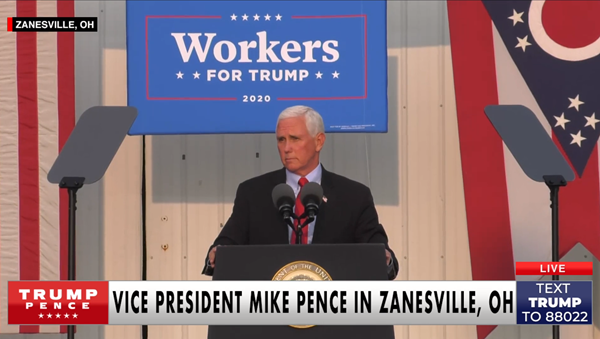