The panel highlighted President Trump's bold actions to restore our nation's economy to unprecedented heights in contrast to Joe Biden's record of economic failure. They provided insight into the President's America First agenda and compared it to Joe Biden's globalist record. The panel addressed the massive enthusiasm gap between President Trump and Joe Biden and how the mainstream media is failing to report on it. While President Trump is out front leading as the president of law and order, Joe Biden refuses to stand up to the left-wing mobs taking over our streets while further embracing the radical left in his party. Additionally, the panel provided a variety of ways the viewers can come together to re-elect President Trump this November. 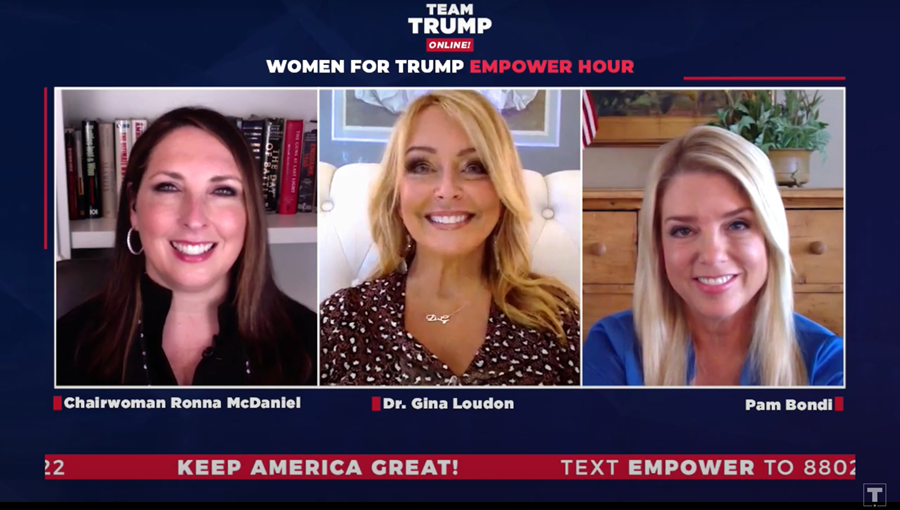 “Through his America First agenda, President Trump is fighting for the forgotten men and women that Joe Biden left behind during his vice presidency,” said Ronna McDaniel, Chairwoman of the Republican National Committee. “This is the election of our lifetime and will dictate which America we live in. President Trump is the only one who can protect our freedom and values from Joe Biden and the radical left.”

“It’s no secret that Joe Biden is controlled by left-wing, radical Democrats, and his refusal to condemn the violent mobs that have invaded our streets only proves how illusive his leadership actually is,” said Pam Bondi, Former Florida Attorney General, Former Special Advisor to President Trump, and Co-Chair of Women for Trump. “We have a law-and-order President in President Trump, and he has proven that he will do whatever it takes to defend the safety and security of the American people.”

“Joe Biden oversaw the slowest economic recovery since World War II, and his job-killing agenda would devastate our current record-breaking economic comeback,” said Dr. Gina Loudon, Co-Chair of Women for Trump. “President Trump has been out front, delivering on his Promises Made, Promises Kept, and that is why it is essential that we re-elect him this November.”